Electric and hybrid powertrains—they are all the rage in both standard and exotic autos now. There is a long list of both pros and cons for new technologies, as is to be expected. Mercedes-Benz is combating the problem of electric cars being to silent by adding some artificial engine sounds. Electric car engine sounds can be added to the mix to factor out accidents with pedestrians.

So why is a silent automobile an issue? Imagine strolling across the street and never hearing a car come around a corner. Because vehicles can be lethal, auditory enhancements are being made to electric Mercedes-Benz models to announce their presence on the streets. 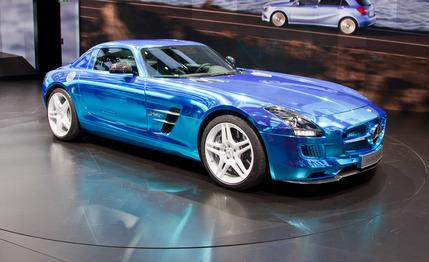 It would seem that the automotive sound realm has come full circle, first trying to quiet certain models down (looking at you, Rolls-Royce) to making muscle cars louder, to now adding mild acoustics to electrics. The team working on the project has added a “sonorous purring” to the e-Smart city car. The Mercedes-Benz SLS AMG Coupe Electric Drive will not be subjected to such disgrace, however, and will receive a more aggressive tone to identify its presence.

Because hybrid and electric powertrains are still in their infancy, no data is currently available to outline injuries caused by them. Many countries are taking precautions by creating new legislation mandating safety measures such as sound. Mercedes-Benz is joining other automakers in adding noise to silent electric models. Other brands doing this include Renault, Nissan, Audi and more.

The sounds will be those of authentic vehicles, thankfully. There was a bit of chatter about using bird chirps and other odd (stupid) noises. It is a car…leave it a sense of power and decency. I do not even want my smartphone to chirp…just saying.

You can hear just how quiet the car is on the track in the quick clip above.
Post by Imagine Lifestyles Luxury Rentals